Last week I learned that April is the month that all of the area preschools fill all their empty spots for fall. This was inconvenient. My town has a bunch of small home-based preschool programs, and I had always imagined moving Stump away from his from his large daycare center and into one of these setting when the time was right. I had thought we’d simply know when that time had arrived and the right spot in the right place would present itself to us. Clearly I had failed to think it through. We had already missed all the open houses. We had missed the moment that enrollment opens and parents clamor for spots and lay down their money. We were competing now for arbitrary openings left here and there, or hoping to be first on a waitlist. This was failure #1.

Kellie was working in another state when this search began. I had to rearrange my days to schedule phone calls and visits until there were no moments left for dog walks or staring out the window. The hustle of running from appointment to work to appointment to dinner and dishes and bedtime amplified my super-limitations. 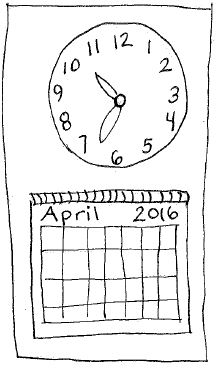 I failed to notice an appointment in my calendar, and so I double booked.

I failed to make Stump pee before bedtime, and so he wet the bed in the middle of the night.

I had a nightmare about missing work, and then I risked missing work when I failed to get Stump to daycare on time.

The cutoff for morning drop-off is 10:30, and we had scheduled a visit at a nearby preschool at 9:30. Stump had clung to me for the first fifteen minutes while we watched kids play with play-dough and rolling pins at the table. He got up in time to rifle through a bin of seashells and two four-year-old girls accosted him when we broke one. “Oh that’s fine,” the care provider told them. “I don’t know why they’re being like that,” she whispered. “The shells always break. That’s what they’re there for.” I chose not to share with her that breaking stuff is one of Stump’s major skills. At 10:10 I said “We’d better get going,” and then time did one of those tricks where it bends in a loop. I asked the provider one last question and her answer lasted a minute or two. Then we discovered that Stump had wandered into the kitchen and found the open door to the basement. On the way to the car, Stump wanted to explore the yard which had a small play shed with a pirate flag and a row of logs for jumping on.

By the time I got Stump in the car it was 10:24. We didn’t have far to go, and so the whole way there I was optimistic that 10:30 was more of a soft guideline than a hard deadline. We made it to Stump’s classroom at 10:34 and for once Stump was immediately happy to be there. Just as he was unzipping his coat, his teacher approached me and whispered that she had to follow policy. No 10:34 drop-offs. I didn’t know whether to feel mad or ashamed or sorry, and so I felt all three at once, and those feelings battled in the pit of my stomach. I whisked Stump away, his coat half-unzipped and he asked me why we were leaving. “Because Mommy was too late,” I told him. “Why are we leaving?” he asked again, not understanding.

Kellie had arrived home on a plane the night before and luckily-unluckily she was home for the day, caring for Smoke who was running a fever. I knew she’d been planning to clean the house, to sweep up all the crumbs and wipe all the sticky spots and fold all the laundry from the ten days she’d been gone. I knew that with Stump home now she’d be doing very little besides taking care of Stump. When I came through the door with him, I thought I perceived a look. “What do you want me to do?” I hollered before I scrambled back to the minivan and drove back to work.

In the grocery store, I swiped the debit card before my total had loaded and the clerk had to remind me to wait for the prompt. This happens every time. Twenty years of my life I’ve been paying with debit cards and still I can’t seem to get it right.

On Friday morning I failed to control my son at yet another preschool visit. The teacher was so quiet and collected and when she needed my son to do something, she spoke exclusively in “You may” statements, as in: “You may take off your shoes now,” “You may step away from the computer,” “You may help clean up these blocks.” This had the effect of paralyzing my own parenting because I do not speak in “You may” statements—I speak in “Hey” statements as in “Hey! Get away from there!” or “Hey! Clean that up!”—and so anything I said to my child sounded like yelling. And so, when Stump picked up a piece of plastic corn and pretended it was a gun, I said nothing and hoped the teacher would not be too offended. And when Stump dismantled a wall of cardboard blocks and then began to roll around in the mess he made, I said simply, “I think we will need to get going soon,” instead of “Oh my god! You are out of control, dude!”

Once I had dropped Stump off at daycare and arrived at work—on time this time—I looked in the mirror and my reflection said it all. The night before I had fallen asleep with wet hair, and in the morning I had tried to tame it by brushing it into a ponytail. I had thought it was more or less safely contained. But no, my hair was frizzing and falling out the elastic in random pieces, some of them wavy and some of them straight. I was not passably put together, not even for a Friday.

The thing about my hair is that it often tells the truth about me. Even on my best days, I have a wild cowlick that rises up in the back an announces to the world that I can never fully contain myself.  I’ve said this before, but during weeks like this I think of my fellow humans, especially the ones who manage to walk through the world in lipstick and high heels. For a while I consider how I might leak out through the edges a little less. Could I pull myself together if I tried? I think it would take a lot of effort and expense. It would require supplies like hairspray and depilatory creams. It would require personal trainers and professional organizers. And still, at the end of the day I would probably come home and discover that I had spinach in my teeth or that I had put my underwear on inside-out. So I think I’ll keep doing it this way, where I’m visibly frazzled and imperfect, where the emotional energy I have at the end of the day goes into accepting that imperfection rather than trying to will it away.

6 thoughts on “Last Week: a list of small failures”