Ever since Smoke started kindergarten, I’ve had to face that he has a life apart from me, one that I know very little about. When Smoke was in preschool, I lingered during drop-offs and pick-ups. I chatted with his teachers; I watched him play with friends; I got all the necessary updates about what he ate and if he napped.

But now that Smoke’s in public school, he inhabits a larger world, and I have to rely on the little he tells me. I’ve learned about the girl that chases him, the boys who drool over his cookies at lunch, and the girls who have a No Boys Allowed club on the playground, and I’ve known about Jeremy (not his real name, of course), one of three classmates that Smoke invited to his birthday party several weeks ago.

Jeremy arrived with his grandmother and clung to her at first, but by the end of the party he was trailing Smoke. Jeremy has round brown eyes and a tiny, high voice, a voice that he used to ask Smoke, over and over, “Are you sure you have my present?” He was worried, I guess, that someone had stolen it, or that it had fallen beneath the table. He sounded perpetually on the verge of tears.

Jeremy is a sweet boy, but I felt protective of Smoke. I didn’t want anyone squelching his social potential. And if I’m being honest with myself, I have a secret hope that Smoke will be more liked than I was in grade school. “You get to choose who you play with,” I told him. Smoke had no response to my unsolicited advice.

With so little to go on, I’ve had to live with the fact that in some respects Smoke is a stranger to me. Though I’ve heard bits and pieces of what happens on the playground, I’ve had no idea who he is in the classroom. Is he loud? Is he funny? Is he shy? Does he follow directions? Does he hold up the class when he’s slow? And so I’ve been looking forward to our first parent-teacher conference. 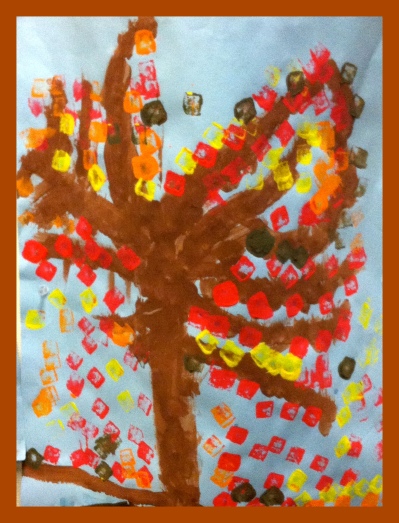 On Friday, at 2:30 pm, Smoke and I walked the three blocks to his school. As we waited our turn to meet with Mrs. N, Smoke showed me the tree he’d printed during Center Time, and boldly peered in the window. But the moment Mrs. N opened the door to let us in, Smoke held my hand delicately and led me to the conference table. We sat across from Mrs. N in the tiny chairs.

Mrs. N was systematic. She had lots of ground to cover in thirty minutes. She wanted Smoke to demonstrate his reading skills, and so she took out one of her packets and Smoke followed along with her finger, making a sound for each letter she pointed to, keeping with her time. He spoke with a voice I didn’t recognize, a voice that was soft and unsure, though he moved at a pace that was confident. This wasn’t the boy I know at home, the one who shouts in his brother’s ear, who runs laps around the house naked, who consistently ignores my instructions no matter how politely or how sternly I offer them. When he and Mrs. N had completed the page, he looked up and she offered a quick nod of approval. Then it was on to math.

I watched and waited patiently. I had expected it to go this way. I’d spend the first twenty-five minutes getting the particulars of Smoke’s learning. The overall assessment, the Who-Smoke-is-in-Kindergarten would happen at the very end.

I couldn’t quite look Mrs. N in the eye once she got to that part. She has this way of breaking character and getting misty-eyed when she talks about her students, and I knew that if I looked at her directly, I would melt into a puddle of goo. She observed that Smoke had “blossomed” over the past few weeks, that he had gone from acting shy to being comfortable. “He has a very gentle soul,” Mrs. N confided, and I tried to casually flick away a tear before it dribbled too far down my face. “He’s kind to all of his classmates, and he has such a good time with Jeremy—“ Mrs. N stopped herself and I looked up at her once more. She leaned in and lowered her voice. “But Jeremy’s moving to another town. I just learned that. Monday will be his last day. You might want to give Smoke a heads-up.”

“Oh well,” I said blithely, remembering what Smoke had said earlier in the week about his daily recess requests. “Smoke is a pretty go-with-the flow kind of guy.” I was assuming that Jeremy’s departure might open the door for Smoke to make several new friends.

As Smoke and I approached the first crosswalk on our way home, I asked if he had heard what Mrs. N had told me about Jeremy. He hadn’t. A feeling came over me then, and I suddenly understood that this might actually be a big deal.

We stopped walking and I crouched down to be as short as Smoke. “Jeremy’s moving.” Smoke’s face fell. “He won’t be in your class anymore.

His lip quivered. “But he’s my best friend.” His head sank and he cried.

I scooped him up and carried him home, his butt propped on my arm, all of his limbs dangling as he cried and drooled into my neck, and I sniffled along. We were a sobbing, dangling mess of sad walking home in the drizzle.

Here is what I learned from this, Dear Reader: of the three of us who sat at the table—Mrs. N, Smoke, and myself—I was the least qualified to talk about Smoke’s social skills, to declare him laid-back, to decide how many or what kind of friends he needed. Smoke is the expert, Mrs. N is the observer, and I am the outsider.

For the rest of the afternoon, Smoke taught me about the kind of friend he is. We bought Jeremy a card and a small gift for their last day together on Monday, and Smoke painstakingly decorated the card with pictures and words.

And beginning on Tuesday, kindergarten will be a new place for him, the same place it was, but minus a best friend, a safety net. I hope that I will find a way to make space for the bigness of that, because the truth is there’s not much else I can do. Every morning, five days a week, he steps into a world that I have little influence over, a world that I will never fully know.

9 thoughts on “Greeting my Son’s Alter-Ego”